Mary the Chalice: Mother of Mercy 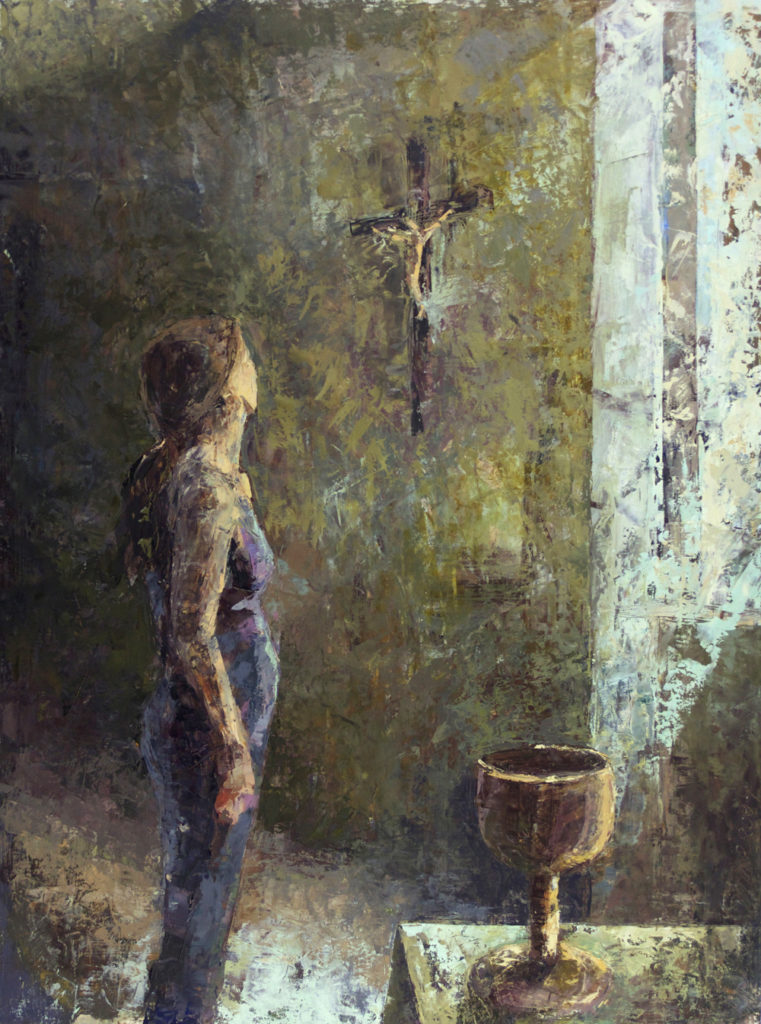 Mary the Chalice: Mother of Mercy

This medieval hymn explaining the role of Mary in God’s plan of salvation is the inspiration for an entire series of paintings and prints which I have been working on for several years.

“Mary is the Mother of Mercy because her Son, Jesus Christ, was sent by the Father as the revelation of God’s mercy” (John 3: 16-18). S. John Paul II Veritatis Splendor

This painting Mary the Chalice is a meditation on the line: ‘Mary the Chalice, Christ the saving blood.’ Mary was chosen for the greatest mission ever given – to be the God-bearer, a vessel who bore Jesus into the world. Mary is the container, the chalice, which the Father chose to deliver His Mercy to us, His people. In the same way the chalice is the vessel that carries the wine (Christ’s saving blood) to us in Communion.

Mary becomes the Mother of Mercy by becoming the container, the chalice, which the Father chose to deliver His Mercy to us, His people.

Here the woman looks at the Crucifix, the suffering Christ. The image evokes the memory of our mother Eve, whose disobedience brought sin into the world, culminating ultimately in the execution of Christ. Eve’s act of disobedience was redeemed in Mary’s obedient ‘May it be to me as you have said.’ Through Mary’s ‘yes’ the shriveled tree of the cross blossoms into life again, and through Christ’s ‘Thy will be done’ is able to bear the fruit of life and love once more. The flowering of the cross was possible only through shed blood: Christ’s sacrifice of Mercy offered to us in Communion, poured out for us in the sacrifice of the Cross.

This was possible only through shed blood, Christ’s sacrifice of Mercy offered to us in Communion, poured out for us in the sacrifice of the Cross.

God humbled himself in the act of the Incarnation. He became human, taking on a human body and human suffering, and through this humble act of Mercy he came to save us. Jesus is the Mercy of God incarnate, and Mary is his mother, the Mother of Mercy.

Visit the store to purchase prints of  Mary the Chalice by Michelle Arnold Paine.

Sign up for more reflections and to find out about the newest Mary paintings:

Eve and Mary: Door to Heaven

The Monks of Norcia: Re-Building Tradition after the Earthquakes