A new gold silhouettes triptych of paintings is published in Evangelization & Culture, from Word on Fire, with the poems of Angela Alaimo O’Donnell.

Evangelization & Culture, the Journal of the Word on Fire Institute, publishes a new gold silhouette triptych of my paintings in the Spring 2020 Edition. The set of three paintings is a visual accompaniment to the poetry of Angela Alaimo O’Donnell. The publication asked me to complete three paintings to accompany  O’Donnell’s poem “Christ Sightings: A Triptych”. The three poems each highlight a scriptural moment in the life of Christ. The three narrative moments are Christ Calming the Storm, the healing of the hemorrhaging woman, and Christ carrying the cross. A triptych traditionally refers to a painting in three parts, with a central panel and one on either side, like one might see in a medieval altarpiece. The triptych of gold silhouettes reflects the triad of poems.

The Catholic Creatives blog highlighted my first round of gold silhouette paintings in November. The Creative Director for Evangelism & Culture saw the Catholic Creatives feature and approached me to create work to accompany O’Donnell’s poem.  There is a reference to gold in one section of the poem and so the gold silhouette series fit the piece naturally.  The Creative Director asked me to use my painting “Entrance”  as inspiration for the  direction of the new pieces.

The poems were conceived as triptych: One piece in three related parts. Although they can’t be published as such (three pages in a row) in a traditional magazine,  I did conceive of the composition of the paintings as three parts of a whole, meant to be viewed together. They dialogue and relate to each other in color, composition and content.

The process to create the images was complex. I had to develop the imagery while also preparing the surfaces with the imitation gold metal leaf. As I read the poems, a couple of my figure drawings came to mind.

“I see you in your boat, tall brown

man that you are, standing in the prow,

arms raised in supplication to the skies…”

When I read the poem “Storm Chaser” I thought of this drawing from several years ago: 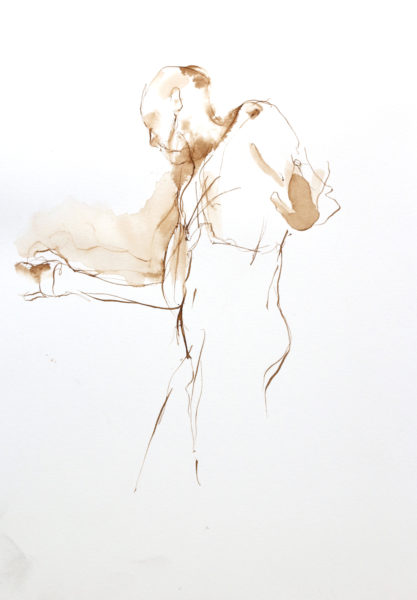 Upon further readings I realized I wanted the head to be looking up and the arms raised higher, so I made another sketch. In the second sketch, the pose looked more like someone lifting their hands in praise rather than someone taking command, so I had to keep working. I had the composition in my mind, I only needed the visual reference for how to relate the head, neck and shoulders when the arms are in that particular position. Fortunately for me my husband had to stop home for something while I was working on this. I asked him to take a pose and was able to snap a quick photograph of him in the pose I was seeking. I printed out the photo and used that silhouette to construct the image Christ calming the storm. 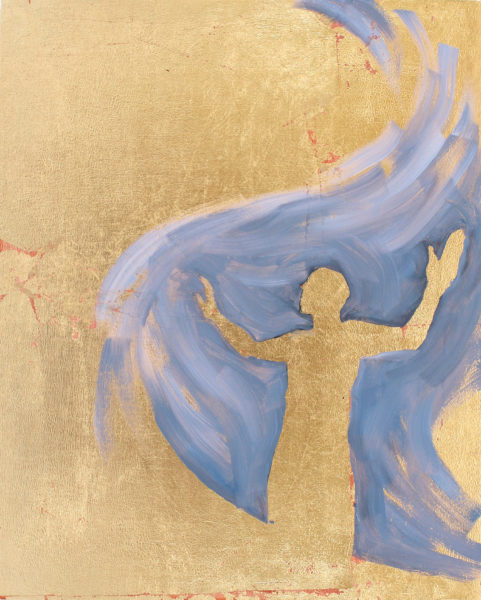 The narrative of the woman who was healed by touching Jesus, from Mark Chapter 5, inspired the poem “The Thief”. I went back and forth with the creative director about poses for the hemorrhaging woman several times. The first drawings I sent her were crouching rather than kneeling poses. Eventually I had to construct the pose for “Reverse Midas” from memory. With literally thousands of hours of figure drawing under my belt, I have created a library of figures in my memory. As a result I was able to sketch a believable kneeling figure without too much difficulty. 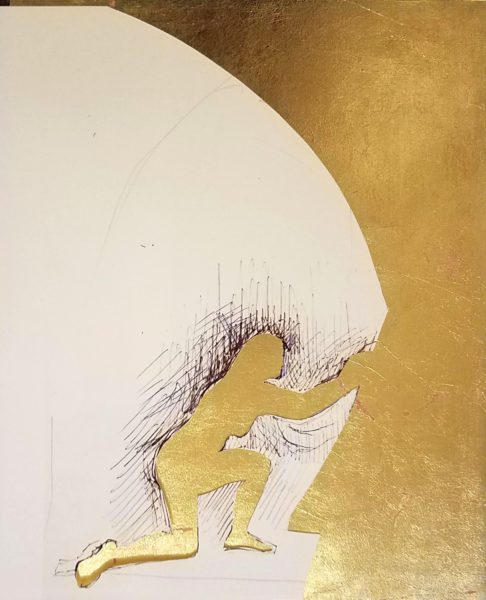 “When she touched him she stole his fire,…

… Call it a Reverse Midas Moment.” 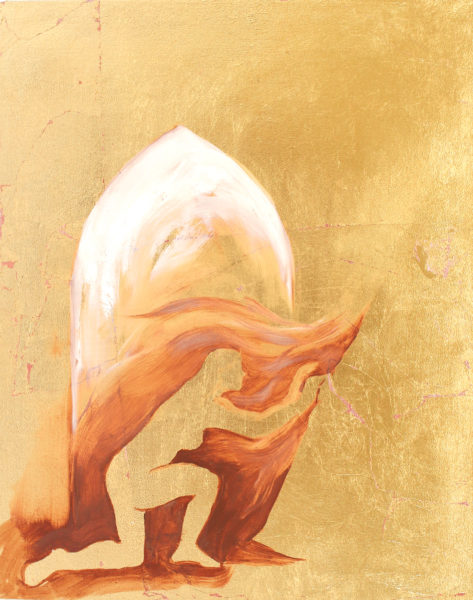 Poetry and Art in the Word on Fire Institute Journal : Reverse Ekphrasis

I thought of “Twisting Male Nude” almost immediately for the third poem of the triptych, “Via Dolorosa”. 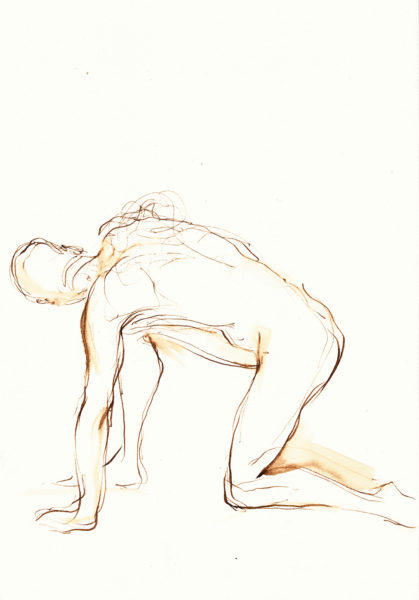 I printed out the photo of the drawing so that I could create a layout sketch of the composition without altering the original drawing (available in my online store). I sketched the cross on the figure’s back. To get a feel for how it would look on the scale of my panels, I cut up the printout of the drawing with the cross sketched on it and placed it on the 8×10 panel.

As I contemplated the most accurate and simplest way to transfer my image onto the very fragile imitation gold leaf surface of the panel, I realized that my usual method of “sketching out” with a grid, pencil, charcoal, or a layer of underpainting would mar the metal leaf surface. So I simply traced around my image cutout using paint, creating a true silhouette.

“Put your hand in my side, Christ said

to Thomas. I put my hand in

the hole in the wall. It was just

the size of a suffering man’s,

it was just the size of my sin…

Evangelization & Culture is a publication available to members of the Word on Fire Institute founded by Bishop Robert Barron.

It was a pleasure to discuss the project in more detail with the poet Angela Alaimo O’Donnell in November of 2020. You can listen to our conversation and view the paintings on YouTube by clicking the link below.