Over and Through, Oil on Canvas, 20″ x 16″ ©Michelle Arnold Paine. Click to Purchase

My recent series of oil paintings of medieval architecture were inspired largely by our trip to Italy in 2017. The series  expresses a yearning for the divine which is emblematic of crossing into a new year.

In 2017 we made the first trip back to Italy in eight years, and the first ever for my two girls ages 5 and 2. It had been eight years since I had seen most of my friends there. In that eight years there had been some deaths and many births (see my essay about the life and death of my friend Elisa Lardani Marchi). I was so grateful to be able to return, but also nervous.

I had a family now, a husband and children, and so did they. Would we be able to relate as family units to each other with the same warmth and interest and intimacy as we had when we were single? Surely dynamics would be different. Twenty years ago I participated as both student and staff in the founding of the Gordon-in-Orvieto program. Those three years were a time of spiritual and artistic discovery for me. That moment of my youth remains so strong, but we can’t go back.

When we returned home from our two-week trip in December 2017 we had hundreds of photos to sort through, as one does now in the age of digital. Through this process of sorting through photos I began to collect images for the new series of paintings which I will be releasing soon. Some of these new paintings will be in an exhibit entitled “Divine Dimensions” in the spring of 2019 at 20North Gallery in Toledo.

The curator of the exhibit coined the title “Divine Dimensions”. It is such an appropriate title for the paintings and drawings of the last few years which express in some sense a yearning for the divine, celestial side of life which lies beyond what we see.

The paintings and drawings of the last few years express a yearning for the divine, celestial side of life which lies beyond what we see. 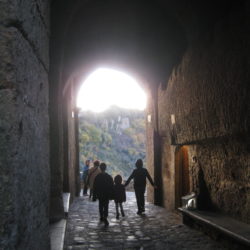 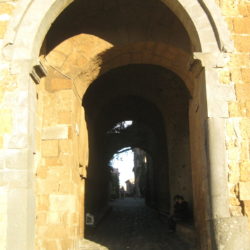 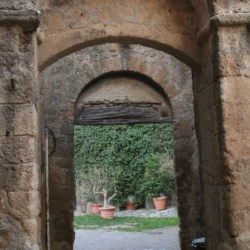 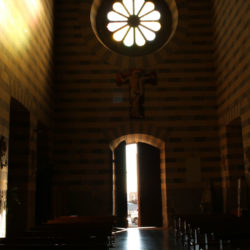 As I sorted through the images from our 2017 trip to Italy, I also dug back into some of the photos from previous trips, and from my time living there. The theme of “yearning for something” beyond began to take shape through architecture, again. In graduate school and the years after, my paintings, drawings and prints focussed on the interior architecture of churches. They were a metaphor for spiritual searching as I reflected at that time on the years I spent there. For the last several years I had been unable to create any more of those interior paintings… the imagery did not speak to me anymore.

This time I was returning to Italy with more life, love and sadness, and also more people in tow!

This time I was returning to Italy with more life, love and sadness, and also more people in tow! I had been hoping, praying that the trip would somehow lead to my next series of paintings, though I did not have a clear vision of what that would be. As we wandered around with whining children I did know that whenever I saw light pouring through a stone arch I was supposed to photograph it.  In the studio my paintings returned to an architectural theme -but this time with the drama of outdoor light, integrating the love of landscape which I pursued for several years.

The stone walls and gates of  medieval Italian towns became a metaphor for looking forward to something bright and beautiful that I am only sometimes able to glimpse.

Over the course of 2018 these images came to fruition in the studio. The stone walls and gates of  medieval Italian towns became a metaphor for looking forward to something bright and beautiful that I am only sometimes able to glimpse. The arches and the contrast of light through the opening, and the enveloping darkness on this side of the archways became a metaphor for looking back on the formative time I spent in that place, trying to recapture the vision of creativity and possibility that was planted in that time.

The arches became a metaphor for looking back, trying to recapture the vision of creativity and possibility that was planted in that time. 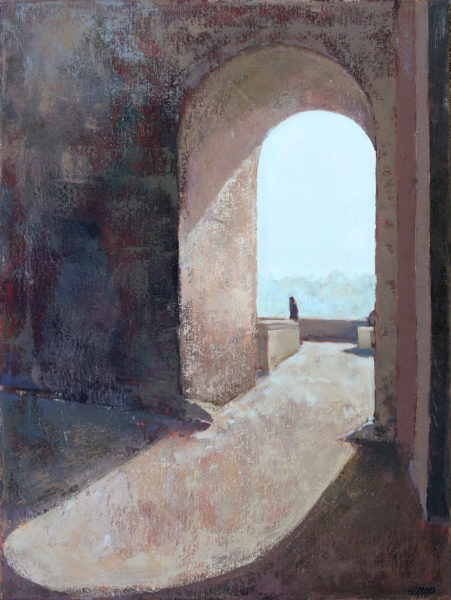 Through the Light: Orvieto. Oil on Canvas 20″ x 16″ Click to Purchase.

It seems an appropriate image for the New Year – looking back and looking forward but always passing through. I am excited to continue to share these new paintings with you over the next few months!